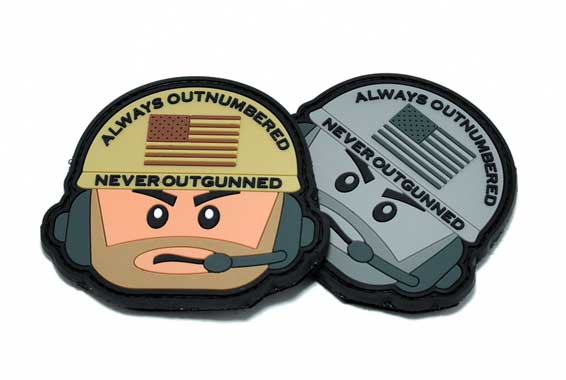 With the invention of soft PVC, the Morale patch has sky-rocketed in popularity. No longer are they just for our Military, they have found their way into sports groups, youth groups, air soft, paint ball, motorcycle groups, private clubs, fundraising events, etc. You name it and there is probably a Morale patch supporting its members. The evolution of the Morale patch stems from the beginning of our United States Military Uniforms and Law Enforcement.

#1 – Where the Morale Patch Came From

Morale patches are a strong part of our Military history and are deeply connected to our Military Soldiers and Law Enforcement Agents. Even before World War 1, you can track the Morale Patch to the British Army who called them “Battle Patches.” Mainly used to identify allies and enemy units; the distinctive designs would belong to each individual unit as a way to know who was who. 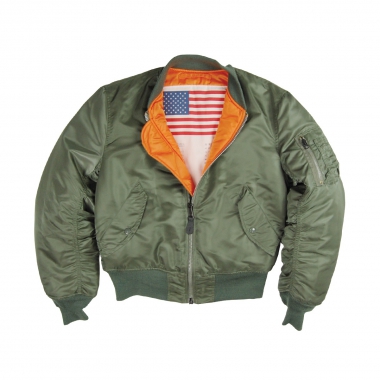 The Blood Chit is a notice carried by military personnel and addressed to civilians who may come across an armed-services member – such as a shot-down pilot – They were usually sewn on the inside of flight jackets and were actually first issued by President George Washington in 1793, A ‘Chit’ is a term meaning ‘A Small Note” in Britain and considered one of the first Morale Patches. Today where these are still present and at work; many have evalved the Chit to the insignia style message, otherwise today known as ‘The Morale Patch.” 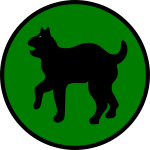 Tracked back to World War I; the 81st Division Wildcats of the US Army, created the first Morale patch. It was suggested to Army Officials that a patch should created to acknowledge a division. The insignia was approved to help the morale of the troops and it wasn’t long after that where General Pershing ordered ALL divisions were to create and wear a patch; something unique to their division.

In the 1920’s, the patches were becoming so unique and individualized, that widespread popularity took over the patch and it became an item for trading and collecting. This was a very successful way to bring the civilian population in with the military population and make Law Enforcement agencies more approachable to the general population.

The term Morale Patch was born from Vietnam War Era. This is when it became wide-spread practice for individual soldiers to make sarcastic, rude or critical statements on a patch, somewhere on their uniform. This was a great way to keep up the spirits of those fighting in the war and create comradery between the divisions.

#6 – You can thank our US Navy Pilots for “ANYTIME BABY!” 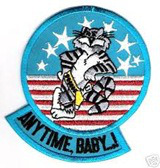 The modern morale patch, in all its sarcasm and glory, can be largely credited to US Navy pilots. ( Tom Cruise in Top GUN also did his part) These warriors, in 1981, shot down two Libyan Su-22 Planes that had engaged their F-14s. Out of this the very famous phrase and Morale Patch was born….”Anytime Baby…!” This Morale flight suit patch was coined and made famous as it commemorated the first Gulf of Sidra incident. This cool cat is a big part of the Modern day Morale Patches of our incredible Top Gun Fighter Pilots.

#7 – Even our Oldest Super Hero’s have Morale Patches!

If you started searching for some of the most creative and famous Morale Patches; you will find that all of our Super Hero’s also have their own moral boosting patches. Here is Wonder Woman’s Morale Patch available for sale. It’s tough work fighting the universe!

From the Military to Police, Canine Officers to EMT’s, Fire Fighters to Coast Guard…all of our protectors, far and wide, are well represented in the collectible Morale Patch industry.

Today, patches can be found for almost all Civilian and Government Groups. Morale patches will always have collectors, enthusiasts, operators, family, comrades and the civilian population share in their appreciation. While most Morale Patches are moving to PVC, there is a rich history and still booming marked for the embroidered patch.

Patches are What we Do!

We pride ourselves on being a quality supplier of morale patches. We pay the utmost attention to detail with all of our PVC patch designs being unique and bold. We utilize layering (2-D or 3D), textures, even printed on PVC for some of the most detailed effects. There are so many options available we can help you with to guarantee the unique and individualized patch design exclusively designed for you. Whether you are wanting a Morale Patch to identify or to entertain, PVC or Embroidered Morale Patches are the way to go and you have come to the right place.

1 thought on “7 Fascinating Facts – History of the Morale Patch”